I am so happy to be bringing to you a review for one of my most anticipated reads of June! You all know–or will now know–that I am part of the Con Sabor reading challenge in which I will be reading as many Latinx books as I can. One of the categories calls for fantasy and today’s book falls into that category!

Many thanks to Raincoast Books for providing me with an ARC!

Curse of the Night Witch by Alex Aster 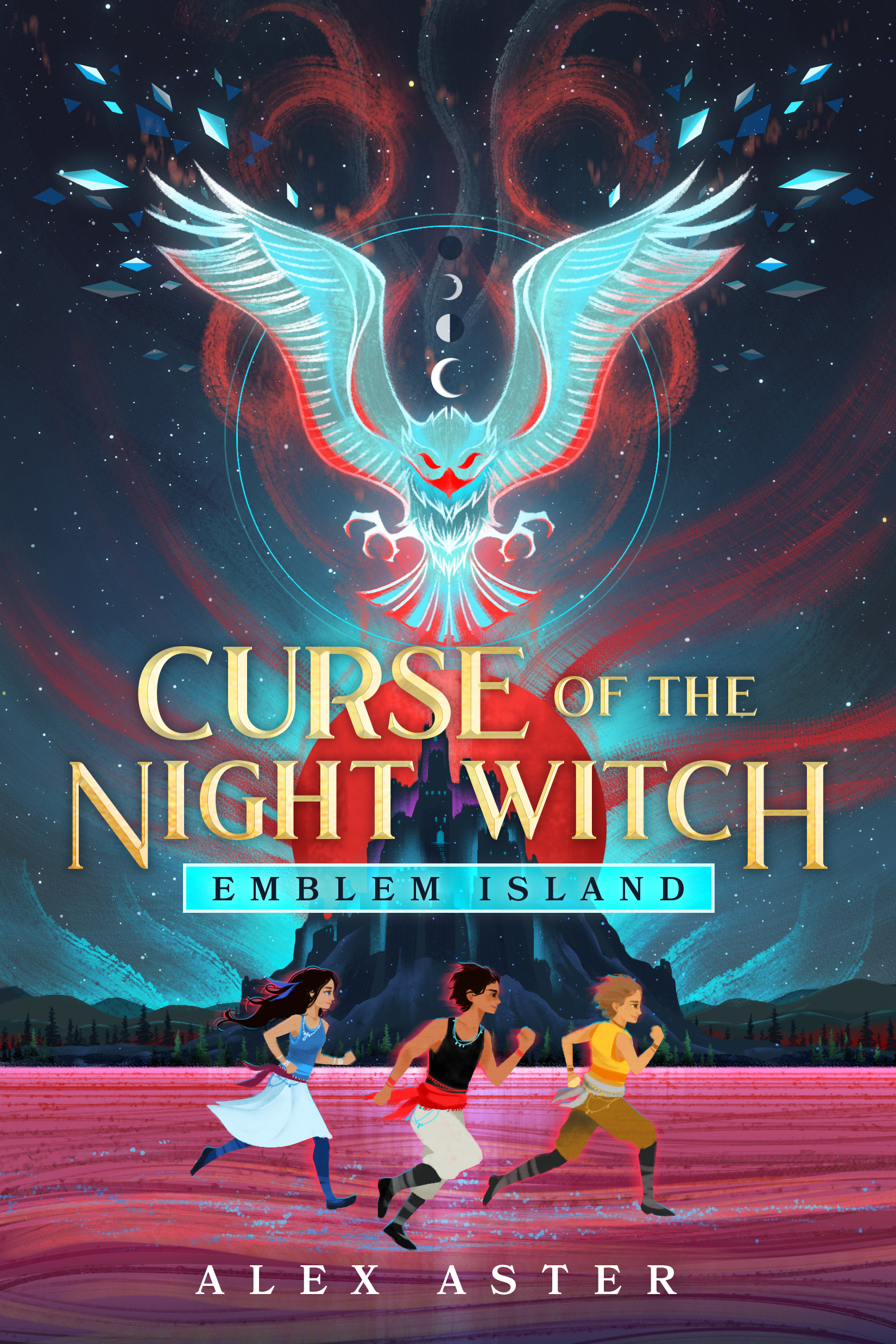 On Emblem Island all are born knowing their fate. Their lifelines show the course of their life and an emblem dictates how they will spend it.

Twelve-year-old Tor Luna was born with a leadership emblem, just like his mother. But he hates his mark and is determined to choose a different path for himself. So, on the annual New Year’s Eve celebration, where Emblemites throw their wishes into a bonfire in the hopes of having them granted, Tor wishes for a different power.

The next morning Tor wakes up to discover a new marking on his skin…the symbol of a curse that has shortened his lifeline, giving him only a week before an untimely death. There is only one way to break the curse, and it requires a trip to the notorious Night Witch.

With only his village’s terrifying, ancient stories as a guide, and his two friends Engle and Melda by his side, Tor must travel across unpredictable Emblem Island, filled with wicked creatures he only knows through myths, in a race against his dwindling lifeline.

This world was truly magical. It was recognisable in some ways, with the school and such,  but it had a totally different societal structure and history that I loved to read about. I loved that we got to read about the legends that are so ingrained in the stories of the people and how the magic of the emblems developed among them. Aster did an amazing job of using whimsical imagery and Latinx legends to create such a wonderful and intriguing world.

The magic system was so interesting. I know lifelines already exist, but not like they do in this book. Here they are 10x more vivid and trusted sources of information about your future. Then there is the magical marker/tattoo, the Emblem, that tells you exactly what kind of special power you will inherit. It is a magic that is quite interested in who the person will become and to reject it becomes a test against fate and destiny which is always fun to read about.

These characters were delightful. Tor, Melda and Engle had such personality and banter that I loved watching them squabble and bicker as they get themselves into more and more danger. I loved that Tor was like any other regular 12 year old who unhappy with his predicted future and did something about it that may have not been the greatest decision. I really related to Tor’s desire for adventure and excitement in his life that was just quiet and comfortable. I don’t know if I could have gone to the extremes he did when I was 12, but I admire his effort.

The plot itself was really interesting. It’s a race against time that keeps the book moving. I Love Quest Narratives!!! The characters are fighting for their lives as they trace back legends and magical monsters which lead them into lots of danger and trouble. I can definitely see how Aster took inspiration from Latinx myths and tales which she also cites in her acknowledgements. I think tracing back the magical tales was my favourite aspect of the book because we get to see the original written tale and then interact with the tale in real time with the characters. I’m not sure that last sentence made sense, but basically what you have to know is that this story is closely tied to myth so pay attention!

I had an epiphany at the very end about Tor and wow. I really did not catch it until the last turn of the page and it made me so excited for the next book. There is always something more than meets eyes about characters and it is so thrilling when you find those tid-bits the author leaves behind.

The ending itself is quite nice. Not too cliff-hangery but definitely cliff-hangery. It sets up great intrigue for the next book and I am excited to read it.

Despite being a race against time, the book does take a while to get moving. It’s not very fast-paced since the characters meet so many people/myths along the way and they each have to get their moment. I think it might also be a little repetitive in the middle. Don’t get me wrong, I enjoyed the myth-hunting very much but I could sense the pattern in the middle and eventually the story felt like it was dragging a little too slow. Nonetheless, each myth was very interesting!

Overall, I really enjoyed this book. It wins most definitely for its magical prose and charmingly realistic characters! It was exciting, whimsical and totally immersive. I think young readers and older ones alike will find something to love about this story!

Recommend: Absolutely! This is a great read for fantasy lovers!

Let me know what you think! Are you looking forward to reading this book! Do you like to learn about myths from different book worlds? What is your favourite magical quest read?