It’s been a while since I reviewed a Middle Grade novel for you all! It is high time that I do, so here I am today bringing you the content you deserve!

Now let me take a moment to drool over this cover. I just love it. Everything about it. From the muted colours of the comic panel in the back to the vibrant and chic illustration of Goldie smack dab in the middle! Just look at her pose, you can definitely tell she is on the move!

Many thanks to HBG Canada for providing me with an ARC! 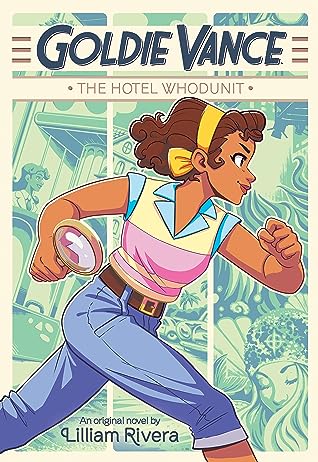 Move over, Nancy Drew–there’s a new sleuth in town! Inspired by the beloved comic series, Goldie Vance is ready to sleuth her way through never-before-seen mysteries in this original middle-grade series by Lilliam Rivera!

Marigold “Goldie” Vance lives and works at the Crossed Palms Resort Hotel in Florida with a whole slew of characters: her dad, Art, the manager of the joint; Cheryl Lebeaux, the concierge and Goldie’s best friend; and Walter Tooey, the hired hotel detective. Her mom, Sylvia, works nearby at the Mermaid Club.

While life at the Crossed Palms is always busy, the resort is currently overrun with Hollywood-types filming the hottest new creature feature, and tensions are at an all-time high. Even Goldie’s mom is in on the movie act, doing what she does best: playing a mermaid. Just when Goldie thinks the movie biz couldn’t get any more exciting, a diamond-encrusted swimming cap goes missing, and all fingers point to Goldie’s mom as the culprit. Can Goldie uncover the true thief before it’s too late?

I really enjoyed these cheeky and quirky middle grade mystery story! There is already a Goldie Vance comic series out there and this an original novel by Rivera based on the existing characters. I had quite a fun time with it, thankfully! The characters were quite humorous and I loved the Hollywood adventures in this small town! I believe this takes place in the 70s/80s so reading about how movies sets used to be was pretty interesting! Goldie was quite the personality! She had a way of smooth talking herself out of trouble that was a lot of fun to read about! Her relationship with her mentor Walt was golden *pun not-intended…but maybe intended* because she was so much more confident and colourful than his wary tense self, but he is a real MVP too!

The mystery itself was pretty fun! I mean, I guessed it a mile away but its a middle grade novel so I am not going to complain here. I will say that I didn’t see absolutely everything coming, so this still should appeal to many kinds of readers, perhaps those who like soft mysteries the most!

My biggest issue was that Goldie was 16 but she read like a 12/13 year old. It was just not the best. Like I understand this is a book for kids and having them read a language that they will relate to is important, but it felt jarring to know that she was 16 and not acting like a teenager. I’m not saying at 16 I was any more mature or put together than Goldie, it would be hypocritical of me to say that, but I think this book would have worked a lot better if Goldie was 13. It’s a good age, she could of still had a job, not as a valet obviously and her crush on Diane would have still been explored (I actually would have liked to see more of the crush adventure too, but I think there is more to come in another book…don’t quote me on it though). It’s just that her as a 16 year old didn’t work for me.
I don’t know how else to say it 😦

Overall, it was a fun book! I didn’t find anything incredibly amazing about it, but I did have a good laugh and enjoy myself for the most part! I think that this is perfect for kids who want to dive into a funny and quirky story about a girl solving mysteries and taking down adults who are super blah!

Let me know what you think! Do you like your mysteries super complicated or more light? Did you read the original Goldie Vance comics?

#blackouttuesday
Q: How do you fair in hot climates? I love the hot weather but I also complain about it sometimes too?!? If it's a fresh summer heat that keeps you warm and toasty I'm all for it, but I have had a lot of experience with the stuffy summer heat that can get too much too fast! Last year's trip back home to El Salvador had me reevaluating my entire relationship with hot weather. So walking through a desert might not be for me? BUT reading about a fantastical desert journey to finding home and love between queer Latinx characters?? That is doable and very welcome! Mark Oshiro's upcoming novel EACH OF US A DESERT is exactly that and I am so excited to read it! It sounds magical and heart warming and all in all AMAZING! If you're as excited as I am be sure to preorder and enter your receipt to receive an exclusive art print! Swipe for details! With the end of Latino Book Month and Pride Month on the horizon this is a great book to hype up and create some buzz around! It doesn't come out until September, but we are counting down the days! #EachOfUsADesert #MarkOshiro #Torteen #reader #tbr #preorderprize #latinxbooks #latinxtbr #queerbooks #lgtbqbooks #contemporarybooks #youngadultbooks #fantasy #ya #igbooks #igreads #fiction #yafantasy #bookishcanadians #newbooks
Q: Have you ever bought the rest of an authors work after only reading one of their books? Yes, yes I have. Yes, yes it is K.S. Villoso. Earlier this year I read THE WOLF OF OREN-YARO and I was completely and uttlery blown away! I've read my fair share of adult fantasy but this one was truly excellent. It completely sucked me in with every turn of the page and the ending was so explosive. Naturally after the high of reading this one I did my research and found out that she has written other books set in the same world. The only logical thing to do was buy them... So I did. Have I read them yet? Alas no. But am I going to enjoy the hell out of them when I do? Absolutely. For now though my greatest advice to you is to pick up a copy of THE WOLF OF OREN-YARO and devour it because you will not be sorry! #TheWolfofOrenYaro #KSVilloso #thebitchqueenchronicles #hbgcanada #reader #bookishcanadians #fantasy #adultfantasy #bookstagram #igbooks #bookstagrammer #fiercereads #greatreads #orbitbooks #fiction #reading #favouritebooks
Q: What fantasy titles are you looking forward to this year? I for one am very excited for HUNTED BY THE SKY by @bhathenatanaz! Not only is this cover absolutely GORGEOUS, the story itself sounds quite intriguing! Set in a world inspired by medieval India, the books is packed full of secrets, vengeance, high stakes adventure and ~romance~. Is that exactly the kind of book I love to read? Yes! I loved Bhathena's last contemporary novel, THE BEAUTY OF THE MOMENT, so I am very excited to see what she does with FANTASY! #HuntedbytheSky #TanazBhathena #bookstagram #yabooks #books #reader #bookishcanadians #fantasy #youngadultbooks #diversebooks #newbooks #newreleases #beautifulbooks #mostanticipated #ARC #penguinteenca #fiercereads #reader #canadianauthor
Q: Have you read every book by your favourite author? Silvia Moreno-Garcia is one of my favourite authors but I haven't gotten around to reading every one of her books yet, including her first novel SIGNAL TO NOISE. Lucky for me I was able to find a used copy at an online bookstore to complete my collection! I think the only other SMG works I need to get my hands on are her short story collections which I hope to get to one day! Her next novel, MEXICAN GOTHIC, is coming out June 30th and I am super excited for it! The cover is gorgeous and the premise is super intriguing, I definitely recommend you all check it out too! #SignaltoNoise #SilviaMorenoGarcia #bookstagram #reader #books #bookishcanadians #usedbooks #favouriteauthors #bookcollector #musicandmagic #igbooks #igreads #fiction #mustreads
Q: What are you doing this weekend? It's the long weekend in Canada so I am planning to spend some quality time with myself. Haha that means lots of reading, some drawing, some blogging and yes maybe a little bit of school work but not too much. Featured today is THE WINTERBORNE HOUSE FOR VENGEANCE AND VALOR by Ally Carter! I have a mini review up on my blog today alongside The Vine Witch! I really enjoyed this middle grade mystery novel! It was full of hilarious hijinks and wonderful personalities that made this a super quick and entertaining story! #TheWinterborneHouseforVengeanceandValor #AllyCarter #bookstagram #reader #books #middlegrade #kidlit #bookaddict #igbooks #igreads #fiction #bookishcanadians #mysterybooks #minireview #hmhkids #hmh #springbooks #epicreads #reading
Back to top
%d bloggers like this: