Today I’m very grateful to bring to you my review for the final book in a Canadian YA Fantasy series! The Realms of Ancient series by S.M. Beiko has been a whirlwind of fun to read since book 1! This is one of the few urban fantasies that I’ve read that are set in Canada and well you know how Patriotic Rendz gets!

If you want to know more about my thoughts on book one and two, follow the links!

Scion of the Fox

Children of the Bloodlands (arguably my favourite of the three!)

The Brilliant Dark by S.M. Beiko 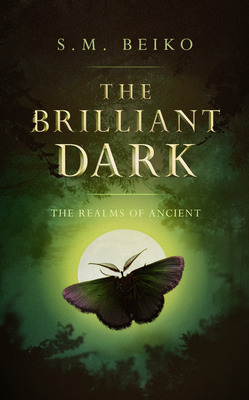 Seven years have passed since the Denizens, people with elemental powers, were unmasked, and seven years since Roan Harken and Eli Rathgar disappeared into the Brilliant Dark.

Marked by Darklings and Death alike, Saskia is a mechanically minded Mundane, raised by Barton and Phae on daring stories about Roan Harken. But the world Roan left behind is in turmoil. The Darklings now hang in the sky as a threatening black moon, and with the order- maintaining Elemental Task Guard looking to get rid of all Denizens before they rebel, Saskia’s only option is to go into the Brilliant Dark and bring Roan and Eli back. But nothing is ever that simple.

The Brilliant Dark is the final, thrilling chapter in this series about gods, monsters, and the people who must decide if they’re willing to pay the ultimate price to protect the family they found . . . in a world that may not be worthy of saving.

*I was provided an advanced reading copy by the publisher*

I did not expect the story to pick up seven years after the events of the last book, and I’ll be honest it threw me in for a loop. It took a while to wrap my head around, but from the very first chapter I understood why it had to be this way. Beiko chose to explore what the world would be like if one day a whole population of magical beings visibly manifested their existence along with the revelation that they had been manipulating how the rest of the world had been working. Us regular folks would find ourselves lost in the balance of the world and having to deal with this “alien race” of people more powerful than us. And as soon as the world “alien” pops up people get scared and then they get defensive. There is fighting, discrimination, oppression all in the name of “peace.” I really enjoyed Beiko’s exploration of this topic and how even perceived to be “peaceful” countries like Canada are not immune to self-destruction.

The magic system in this series is a little complex, but I really like it. It’s animal-based but also element-based with a deity system and we all know how much I love it when the gods come out to play and mess up literally everything. It gets even more complex as the events of the books go by and things gets twisted! I had a lot of fun with it, although I think a diagram or like an index of some sort would have been helpful in keeping track of it all!

The characters were great as usual. Except for maybe Saskia! *hides in shame* She is a super important voice in the story, but I was not feeling her. I couldn’t really connect to her at all and her chapters were really long. The other characters, however, were really great. My poor Phae has had a rough seven years, not to mention the fact that Barton has gone missing. Natti is still a boss and I wish we could’ve gotten more from her.

Now let’s get to the stars of it all. Roan and Eli. Ugh, I love them. Roan is just a great voice through and through. She is a stubborn, lost, unwilling-turned-willing heroine that has sarcasm to last a lifetime. Then there is Eli who honestly started out as a villain in all this and had to work hard to get to where he is now. Together these two create such a wonderful dynamic, a literal force to be reckoned with. They butt heads constantly which is why things take a bad turn during the seven years. There is this one twist between the two that had me shocked, it was fantastic because I honestly didn’t know how they were going to come back from that!

Now the ending has me upset and feeling crushed. But it’s a good kind of crushed that still has me thinking about it which is always a good sign!

Besides the fact that I was not Saskia’s biggest fan, this book is very slow at the start. I think that’s why I questioned the decision to set it seven years in the future. That’s a long time, meaning it’s a new world that has to be built up again which means there are many points of info-dumping. There are also a lot of flashbacks, which some I enjoyed and some I found unnecessary, that stalled the plot further. This book is also in the third person, so we get POVs from anyone and some I just didn’t really care for.

S.M. Beiko is an eclectic writer and artist based in Winnipeg, Manitoba. She also works as a freelance editor, illustrator, graphic designer, and consultant in the trade book and comic publishing industries in Canada and the U.S. Her first novel, The Lake and the Library, was nominated for the Manitoba Book Award for Best First Book as well as the 2014 Aurora Award.

Overall, I enjoyed this book. I thought it was a wonderful conclusion to a great fantasy series that is quite unique in it’s setting and characters. Personally, the original characters are the stars of the show and the conclusion to their journey is a bittersweet one so be prepared!

Recommend: Yes! It’s very unlike anything I’ve read before!