Middle school happened a long time ago for me. Maybe not that long, but it’s a while and I don’t think about it often. It’s not that I had a horrible time there, but middle school is tough and sometimes embarrassing stuff happens/did happen and I block those memories out. Still sometimes I reminisce about what it was like and I cringe and laugh at the same time.

Well cringing and laughing was all I did while reading this book and honestly I had an amazing time!

The Humiliations of Pipi McGee by Beth Vrabel 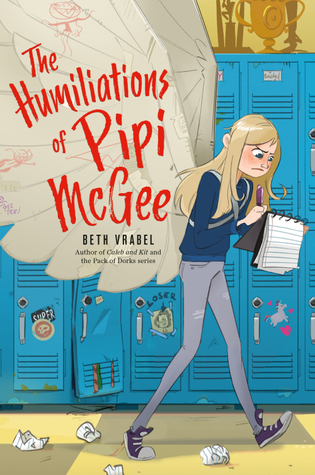 The first eight years of Penelope McGee’s education have been a curriculum in humiliation. Now she is on a quest for redemption, and a little bit of revenge.

From her kindergarten self-portrait as a bacon with boobs, to fourth grade when she peed her pants in the library thanks to a stuck zipper to seventh grade where…well, she doesn’t talk about seventh grade. Ever.

After hearing the guidance counselor lecturing them on how high school will be a clean slate for everyone, Pipi–fearing that her eight humiliations will follow her into the halls of Northbrook High School–decides to use her last year in middle school to right the wrongs of her early education and save other innocents from the same picked-on, laughed-at fate. Pipi McGee is seeking redemption, but she’ll take revenge, too.

*Many thanks to Hachette Canada for sending me an ARC*

Pipi was an absolutely phenomenal character. I loved almost everything about her. From her tragic, self-pity to her rock hard determination, her guilt and shame to her newfound confidence. She had such a grueling time growing up being *that kid*, the one that everyone either tries to avoid or makes fun of. I just wanted to cuddle her and tell her it’s going to be alright, but obviously that couldn’t happen! Besides all that, Pipi is such a wonderful, authentic voice for this story. She is funny, self-deprecating, selfish and sweet, all in one. Perfectly flawed because she’s still just trying to figure out who she is.

There are lots of other character to talk about. Pipi’s family is one colourful bunch. They are far from the conventional nuclear family and I loved them! There is a lot of hilarity to be had from them and also some really heartfelt moments. Then there are the characters from Pipi’s school and THEY are QUITE and INTERESTING bunch. There are so many antics that happen at school, it is truly cringe-worthy and laugh out loud funny.

The actual plot itself is a revenge story. And like all revenge stories there are some major scenes of “Oh SNAP” and trust me you get those kinds of scenes in this book! Are they perhaps to the same degree as other revenge stories? Maybe not. They are on a whole other level of fun and frenzy. I loved every step of the way as Pipi tried to seek out vengeance for all the embarrassment she has suffered over the years, but of course not everything goes as planned.

But if we get down to the nitty-grittiness of it all, this is a story about bullying. The cause-and-effect of it and what happens when you try to forgive. Middle school is rough and Pipi goes through some harsh stuff. Like we’ve all had embarrassing episodes, Pipi’s are on another level and Vrabel perfectly captures the brutality of being laughed at for messing up. It’s not funny when it’s you who is being laughed at. It’s hard and I empathized with Pipi and all the she went through. Especially the tragedy of 7th grade, but we don’t talk about that. If I’m being honest though, I experienced something similar to that too although mine was very low-key.

I can’t say for certain if I learned my lesson in forgiveness after reading this. It’s a shameful confession I know. I still wanted to exact vengeance at the last moment there (because it was one of the cruelest things done to Pipi!) But forgiveness and moving forward is a lesson that is constantly being reaffirmed throughout the story which I think is super important for kids to read so they don’t become cynical adults (like me).

The story is also one of identity. Lot’s of characters in the book are struggling to find out who they are and where they fit in this dysfunctional world. I think a lot of the identity stories will resonate with all kinds of kids who are just trying to be comfortable with who they are.

And the book is just funny okay! It is freaking hilarious. I had the absolute best time with it. (How many times do I have to say this?!) If I had to mention the one questionable thing is that it takes a while for things to get moving, but you almost don’t notice because you are either laughing or cringing from second-hand embarrassment!

Overall, I loved this book! I highly recommend it for anyone really! For those readers in middle school and those who have already past that stage. It’s a heart-wrenching and heart-warming coming of age story. It’s funny, kind of outlandish but also so, so important because bullying sucks and this book politely gives it the finger.

Let me know what you think! How was your life in middle school? Do you like reading Middle Grade books that combat themes like bullying? Have you ever had something so truly embarrassing happen to you in school? No need to share if you don’t want to! 😉