Happy Halloween to my fellow ghouls and ghosties!! It is the most haunting and wicked time of the year! It’s also the best time to eat candy and binge watch all those creepylicious movies. Or if you’re like me and can’t do the creepy, you partake in a Disney Channel Halloween Movie marathon!

Today I want to talk about costumes too! Mandy & Sha @ Book Princess Reviews did a post like this if you want to check it out! I especially want to talk about YA character costumes that I would totally create if I still dressed up! It’s been something I’ve always wanted to do, but I always had this hesitation because I would have to keep on explaining who I was dressed as! Too much work.

Because I am so predictable! I’ve always wanted to go in her coronation get up! With the little silver-red dress and the silver crown, but I would also want to be in her battle gear with her healing elixir and dagger! But then again I’ve always wanted to wear Susan’s bow and arrow and horn! So many good options!

The point is I would love to dress up as a Narnian! 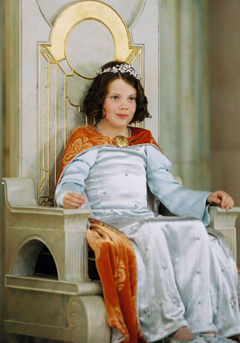 Because I am–once again–so predictable.

Just picture it! A silver armlet, a painted on “K” scar on my chest. I don’t have gold eyes…I would totally delve into contacts!!! As for my clothing, I’m sure I can find some ancient Roman looking get up with a nice long cloak!

I love Laia so much, I would love to pay homage to her in costume!

Adelina is such a rock star and her costume would be sooooooooo amazing!

I would need a nice long white wig. A Venetian style wolf mask or eye patch! Plus a Venetian style dress (which I would probably wear for the rest of my life!) Perhaps I’d add a rose dagger for the ensemble and voila! I am Adelina Amouteru!

Cinder’s costume wouldn’t be so hard to make! A messy ponytail, some big work gloves, a simple t-shirt, green cargo pants and some boots! Add a few grey and brown smudges on my face and arms and I’m good to go! OF COURSE if I wanted to amp up the creativity I could make my hand look all robotic! I’ve always wanted to try it when people do those amazing cosplays! It is definitely something I would consider!

*I know many are shocked I didn’t choose Cress, but Cinder is just more costumeable!*

That’s it for me folks!! If I still had energy I would totally dress up as these characters, but for now I’ll just imagine!

Let me know what you think! Are you dressing up today? Any trick-or-treaters out there? Which fictional character would you love to dress up as?

10 thoughts on “YA Characters I would Totally Dress Up As!| Halloween Special!”