I have the honour of being the last tour stop for this wonderful book. I would like to thank Penguin Teen CA for sending me the invite and the book to take part in this tour and I want to thank all the bloggers before me who have had such incredible posts and reviews!

Confessions of a Teenage Leper by Ashley Little 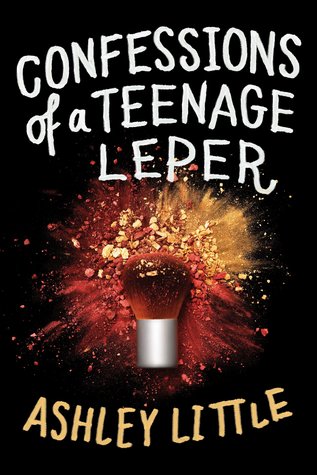 Abby Furlowe has plans. Big plans. She’s hot, she’s popular, she’s a cheerleader and she’s going to break out of her small Texas town and make it big. Fame and fortune, adoration and accolades. It’ll all be hers.

But then she notices some spots on her skin. She writes them off as a rash, but things only get worse. She’s tired all the time, her hands and feet are numb and her face starts to look like day-old pizza. By the time her seventeenth birthday rolls around, she’s tried every cream and medication the doctors have thrown at her, but nothing works. When she falls doing a routine cheerleading stunt and slips into a coma, her mystery illness goes into overdrive and finally gets diagnosed: Hansen’s Disease, aka leprosy.

Abby is sent to a facility to recover and deal with this new reality. Her many misdiagnoses mean that some permanent damage has been done, and all of her plans suddenly come tumbling down. If she can’t even wear high heels anymore, what is the point of living? Cheerleading is out the window, and she might not even make it to prom. PROM!

But it’s during this recovery that Abby has to learn to live with something even more difficult than Hansen’s Disease. She’s becoming aware of who she really was before and what her behavior was doing to others; now she’s on the other side of the fence looking in, and she doesn’t like what she sees. . .

Abby was an unlikable character no doubt. She was vain, shallow and selfish. And yet, I really enjoyed reading her confessions, her journey and her redemption.  The thing is that I understood and empathized with Abby. I’m not saying I was the type of girl Abby was in high school, the flirty, pretty and popular type, but I understood how Hansen’s disease was the most tragic thing to happen to her at the time. Her whole life (not to be dramatic) kind of depended on how she looked and the disease took that away from her, so she had to come up with a Plan B. And Plan B was where the real Abby shined. Where she finds that she can care about her appearance but not make it everything, where she can be compassionate and helpful but also take care of herself.

The writing was spot on. It had that teenage, snobbish vibe to it.  Ashley Little kept me hanging ever so often between Abby’s confessions which is what I really enjoyed. The plot was really well thought out. It starts before Abby shows signs of the disease and finishes off with not exactly an ending to Abby’s journey, but the end of one chapter in her life.

This book was uncomfortable to read sometimes, not gonna lie. Ashley Little holds back only a little when it comes to descriptions and stories. And sometimes Abby’s attitude made me uncomfortable, the tragic, dramatic way in which she viewed her life. But it all added to grander impact of the story and the important message that it left behind.

The subplots were also really well drawn out. I especially loved seeing the evolution of Abby’s relationship with her brother Dean. I was seriously worried for a while for *reasons* There was also even a smidge of romance in it! Nothing too much and it was sweet. I think that for a girl who thought physical attraction trumped all else, Abby had quite a surprise.

Overall, I thought this book was unlike anything. It was interesting, addictive, tragic and heart-warming.  It was sold to me as Mean Girls-esque story and it 100% delivers!!! Not to mention that it is short, fast-paced and more entertaining with each turn of the page! For someone who rarely–and I mean rarely–reaches out for a book like this, it was quite the read!

ASHLEY LITTLE received a BFA in Creative Writing and Film Studies from the University of Victoria and an MFA in Creative Writing from the University of British Columbia. Her book The New Normal won the Sheila A. Egoff Children’s Literature Prize, and Anatomy of a Girl Gang won the Ethel Wilson Fiction Prize, was a finalist for the City of Vancouver Book Award, longlisted for the International IMPAC Dublin Literary Award and has been optioned for television. Confessions of a Teenage Leper is Ashley’s fifth novel. Ashley lives in British Columbia with her partner, their daughter, and her toy poodle, Huxley. (via PRHC website)

Now for the fun part!!

I wanted to leave this tour off with a little bit of pizzazz. Like many characters, Abby goes through a lot in this book. Her character doesn’t just learn to accept, she fights everything along the way, she goes through different trials, has many ups, but lots of downs too.

So I wanted to give you a little insight into Abby’s journey in this book, and what better not-so-spoilery way than through aesthetics! (LOL this is my first time making these collages so they may not be the absolute best, but a girl tries.)

*Disclaimer: I own none of the images used*

Each collage holds some subtle (and not so subtle) hints about what happens to Abby in the book, but in order to figure them out you are going to have to read it!

Let me know what you think! Are you going to pick up this book? Are you up for a mean girl read? What did you think of my first try at aesthetics?