I am a very lucky duck! The lovely people over at Candlewick Press sent me a copy of The Price Guide to the Occult by Leslye Walton. This book caught my eye recently as I was scrolling through Goodreads and other blogs and it sounded absolutely fantastic, so I was ecstatic to find it in my mail!

The Price Guide to the Occult by Leslye Walton 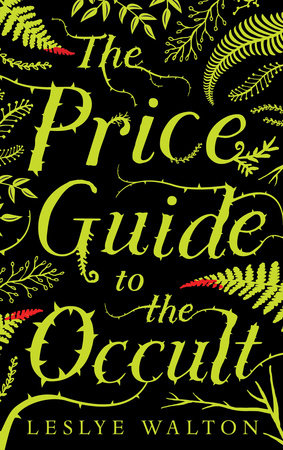 From the author of The Strange and Beautiful Sorrows of Ava Lavender comes a haunting maelstrom of magic and murder in the lush, moody Pacific Northwest.

When Rona Blackburn landed on Anathema Island more than a century ago, her otherworldly skills might have benefited friendlier neighbors. Guilt and fear instead led the island’s original eight settlers to burn “the witch” out of her home. So Rona cursed them. Fast-forward one hundred–some years: All Nor Blackburn wants is to live an unremarkable teenage life. She has reason to hope: First, her supernatural powers, if they can be called that, are unexceptional. Second, her love life is nonexistent, which means she might escape the other perverse side effect of the matriarch’s backfiring curse, too. But then a mysterious book comes out, promising to cast any spell for the right price. Nor senses a storm coming and is pretty sure she’ll be smack in the eye of it.

In her second novel, Leslye Walton spins a dark, mesmerizing tale of a girl stumbling along the path toward self-acceptance and first love, even as the Price Guide’s malevolent author — Nor’s own mother — looms and threatens to strangle any hope for happiness.

Well. This was quite a story. I wasn’t quite sure what to expect going into this book. I knew it had something to do about witches, but other than that and the synopsis I didn’t really know where this story was headed. It had some sensitive content that I was not expecting, so if you are someone who is uncomfortable with themes of self-harm I’ll put in a fair warning here.

Nor: Despite reading Not for like half the book, I really enjoyed Nor’s character. She was struggling throughout the book with inner darkness and fears that have haunted her since her childhood, especially those surrounding memories of her mother. She has always wanted to lead a quiet, almost invisible life, but when you are a witch, from a well-known witch family, invisibility is harder to attain. I really enjoyed reader her journey of growth, her fight to save herself and those she loves.

Although I am no expert in the matter, I think her plight against temptation and giving in to self-harm was well done. It’s a hard battle to fight and even a harder to embrace the scars left behind, but I think Walton did a good job of communicating that through Nor.

Savvy: A minor character and Nor’s best friend, but I had to give her a quick shout out because she was absolutely hilarious and brightened a rather dark book.

I don’t know what it is about islands, but they are totally perfect for witchy settings. The atmosphere was perfect for the book. Mysterious, dense and magical. The whole time I was reading the images in my mind appeared to be cool greys and blues with hints of green because there were so many dark things going on. And as the book progresses and things get worse for our characters, the island gets foggier and spookier. The setting just matched the story to a tee and I loved it!

Magical settings do not just make themselves. I have to hand it to Walton, her writing is quite beautiful. Lots of beautiful descriptions and passages that added to the wonder of the book. It was clear and never really confusing. I’m amazed at how much detail she was able to get in despite it being a shorter book. It was truly visual writing and I am in love!!

I really enjoyed the magic system in this book. It was “hereditary” but different each time. Each Blackburn daughter was bestowed a different burden that was unique and somehow connected to their original matriarch. I think the genealogy of the of the Blackburn Witch family was really fun to explore…though I might have been confused at times keeping track of so many witched.

But the magic in this one is intense. I mean apart from the very useful healing magic and abilities to communicate with animals that Nor and other members of her family could cast, Nor’s mother was another thing entirely. Every time she was present in a scene things got ten times darker and more bloody. It was gruesome and quite–no–VERY bloody. Mix in Walton’s ability to create such stark images with her writing…y’all I was cringing (but also kind of enjoying it!)

I Needed a Family Tree:

This book starts with a really long prologue about the original Blackburn Matriarch and the eight original families of the island. Three pages in and I already couldn’t keep track of all the family names and people that were involved in the original curse. Then throughout the book, Nor brings up past witches and I’d lose count of who was who with what powers and whom they got involved with. It was one big question of WHO? I think a family tree would have cleared up A LOT of confusion and just made the story much easier to follow.

Overall, I really enjoyed this book. It is not quite what I expected it to be. It covered a really hard, but important topic, it got very dark until there was some light at the end and it had a bittersweet romance which kind of hurt me a little. The ending was also something that kind of threw me off…is the author going to do a sequel? I don’t think so…but that was a very rude–yet satisfying–open ending she left for readers.

Recommend: Yes! I think this is the year of the witches and you definitely want to be caught up on all your wicked reads!

8 thoughts on “The Price Guide to the Occult | Review”