I have a special post for you today! A review and giveaway! YAY! We all know that giveaways are probably the most fun things to enter because hello, free books. Emphasis on the free!

Today I will be reviewing The Kingdom of Oceana by Mitchell Charles. It is an adventure story with elements of Hawaiian culture and polynesian legends. It is a super fast read and you will have a chance to win a copy at the end of this post!

The Kingdom of Oceana by Mitchell Charles 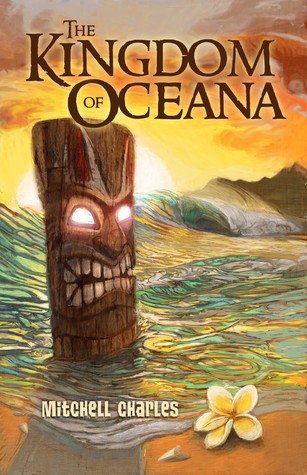 Five Centuries Ago, On the Island Now Called Hawaii, There was a Kingdom Filled with Adventure, Beauty, and Magic. When 16-year-old Prince Ailani and his brother Nahoa trespass on a forbidden burial ground and uncover an ancient tiki mask, they unleash a thousand-year-old curse that threatens to destroy their tropical paradise. As warring factions collide for control of Oceana, it sparks an age-old conflict between rival sorcerers that threatens to erupt-just like Mauna Kea, the towering volcano. With the help of his ancestral spirit animals, his shape shifting sidekick, and a beautiful princess, Prince Ailani must overcome his own insecurities, a lifetime of sibling rivalry, and a plague of cursed sea creatures brought forth by the tiki’s spell. Can peace be restored to the kingdom? Can Prince Ailani claim his rightful place as the future king of Oceana? ONLY ONE CAN RULE.

I have never read a book set in ancient/modern Hawaii or a book that has content with Hawaiian influence. It was definitely new to me, but I love exploring new cultures in books so I was very excited to read it! This book was very colourful and adventurous. It was a lot of fun to read!

Ailani was a fun character to follow. He was the second prince, so he always thought that he would amount to nothing. Which we all know isn’t true, if this whole book is about him. He goes on a grand adventure, seeking his spirit animal and trying to discover the kind of person he wants to be and the kind of traditions discovers. It is very clear that he is doubtful and unsure of himself, but he is also heroic and intuitive. I wish his character were explored a little more, but overall he was interesting to follow.

Nahao. I just liked to hate him. Honestly he is such a rat.

Kolothe, the monkey! He stole my heart and was literally only in the book for a hot minute! I just love animal companions!

There were several other characters, but none of them made a long lasting impression on me. Except maybe the Kahuna because he had all the magic!

The World: Oceana was a very colourful and intriguing setting. There were many descriptions of beaches and caves. There were beautiful descriptions of animals and plants that thrived in the land. The imagery of landscapes and terrain left a good beachy effect on me. Boy, I wish I was in Hawaii!

The Traditions & Folklore: A lot of the journeys that Ailani goes through are derived from ancients myths and legends. In this book, animals have minds of their own. They are able to communicate with the people and help guide them on their spiritual journeys. There are also uses of curses and legends of old kings that wreak havoc on the islands. The myths are interesting and they keep you in tune with the ancient Hawaiian setting. Ailani also goes on spiritual journeys to find the power and self-worth he needs to meet his destiny. I thought it was very beautiful how Charles brought these elements to the story as they are a true part of the culture.

The Use of Hawaiian Words: I am like 95% sure they are in Hawaiian. Anyways, a lot of different words were infused into the characters dialogue and I loved it! Sometimes the words get used so often that you do not have to look at the footnote to understand what is being said. I now know that kohala is whale and kaimoni means demon! It is fun when you get to read the true language that is being spoken by the characters and it adds a little authenticity to them.

The Romance: It’s not that I didn’t ship the ship. It’s just that this book could have done without it. I feel that Momi was just introduced into the novel to be Ailani’s love interest because she had no grander purpose. This romance just should not have been included.

The Lack of Good Character Structure: As mentioned a lot of the characters just didn’t stick and I feel it is because they weren’t fully developed. I needed to know more about them or spend more time with them to truly understand and grow an appreciation for them.

Overall, I still really enjoyed the book. It was fun, it was fast. It was also very educational and I extended my vocabulary with those two Hawaiian words! (I know bug my sisters by saying kohala every five seconds…even if I have no need to!) The ending did leave promise for a sequel, but I think the author is going to leave it up to us, the readers, to decide what happens after Ailani’s adventure.

Recommend: Yes! For those of you looking to explore new kinds of ancient myths, why not try Hawaii?

For a chance to win an audiobook of The Kingdom of Oceana fill in the raffle copter link below!

*This giveaway is Open Internationally!
*No giveaway accounts
*The winner will have 48hrs to respond to my email
*It will run until July 17th!

May the odds be ever in your favour!

Thanks for reading (and entering!) Let me know what kind of ancient myths you love to read about as I would love to know. Fun fact about Rendz: I love Egyptian mythology and want more YA based on it!!

Note: I know next to nothing about Egyptian mythology, but it always interests me!

6 thoughts on “The Kingdom of Oceana Review & International Giveaway!”